Friuli-Venezia Giulia is located in northeast Italy with Slovenia on its eastern border and Austria to the north. The region delivers a diverse selection of wine styles, especially crisp whites, and contains a multitude of appellations where both indigenous and international grape varieties are cultivated. Below we’ll focus on nine areas that are well worth exploring.

Similar to Bordeaux’s Graves region, Friuli Grave, or Grave del Friuli, is named after the gravelly soils found there. The southern portion of this large appellation experiences a warmer climate thanks to its close proximity to the Adriatic coast, while in the north, an Alpine influence provides vineyards with cooler temperatures and more rain. Grapes such as Friulano, Pinot Grigio, Sauvignon Blanc, and Chardonnay feature prominently in the white wine production, whereas Merlot and Cabernet Sauvignon are grown for reds.

Friulano once dominated the attention of grape growers in Friuli Colli Orientali (also known as Colli Orientali del Friuli), but more recently focus has shifted to other local white varieties including Ribolla Gialla, Verduzzo, and Picolit as well as Pignolo and Schioppettino, which are used to produce red wines. The appellation’s name is derived from its location in the eastern hills of the region, and three DOCGs are contained within the boundaries.

The production of sweet whites made from Verduzzo grapes have become the forte of Ramandolo, a DOCG that covers Nimis and Tarcento in the northern reaches of Friuli-Venezia Giulia. Vineyards around these towns typically grow on steep slopes and require hand harvesting, while cool temperatures at night and relatively damp conditions contribute to the amber-colored dessert wine’s rich, aromatic character.

Another famed dessert style of white wine in the region is produced from Picolit grapes and displays lovely floral- and straw-like qualities. These grapes may be dried in boxes or on mats, though some winemakers choose to leave them on the vine in order to allow botrytis, or noble rot, to consolidate sugar levels.

The recently established Rosazzo DOCG has a maritime climate and takes its name from a local hilltop abbey. The area’s celebrated dry white wine blends require at least 18 months of aging and are made from a majority of Friulano grapes along with smaller portions of international varieties like Sauvignon Blanc, Chardonnay, and Pinot Bianco. Up to 5% of Ribolla Gialla may also be included.

The small DOC of Collio provides some of Friuli’s top wines from along the Slovenian border. International grapes such as Sauvignon Blanc and Pinot Grigio tend to give fresh, mineral-inflected whites, while Chardonnay and Pinot Bianco display more depth and complexity from modest oak aging. A small amount of red wine is also produced mainly from Bordeaux varieties. The nearby Julian Alps and Adriatic coast moderate the climate here.

The Insonzo river serves as this appellation’s namesake and a notable geographic feature. Compared to elsewhere in Friuli, the area receives more rainfall, contributing to a maritime climate. Well-drained hillsides offer many of the best sites for viticulture. Sauvignon Blanc, Chardonnay, and Merlot become some of the most renowned wines, though 17 grapes are permitted to produce 100% varietal wines under the DOC.

Stretching out southeast into the Adriatic sea on the Istrian Peninsula, Carso enjoys a unique reputation for orange wines achieved by allowing white juice to retain contact with grape skins during fermentation. The Mediterranean climate here is also beneficial for ripening red wine grapes, including the distinct and ancient Terrano variety.

Encompassing a large geographical area, Venezia Giulia IGT permits winemakers to produce a broad range of wine styles including red, white, rosé, sparkling, and sweet. Local and international grapes play important roles with Pinot Grigio being one of the most popular and accessible examples. 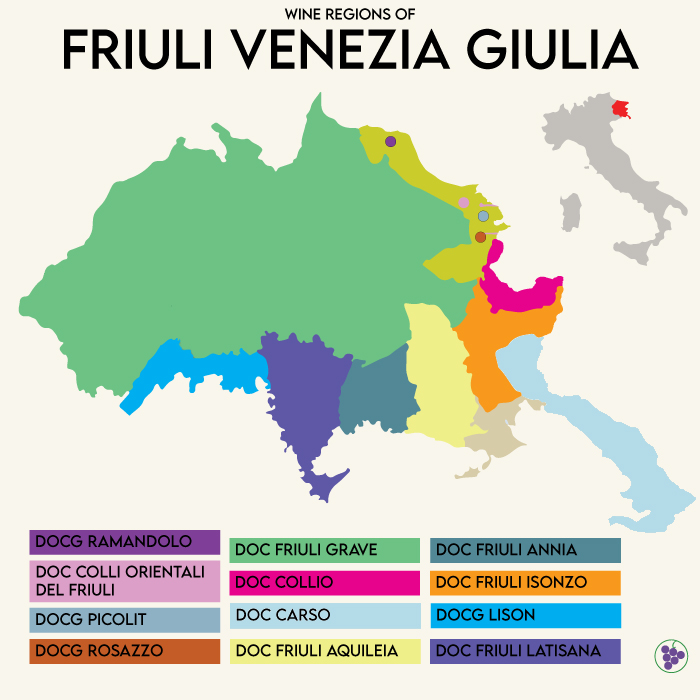