The story of modern wine is told by two plants. The first we understand well to be the grapevine, which provides the raw material for fermentation and, deservedly, receives the lion’s share of our attention. The second plant with a central role in winemaking is the oak tree. We’re all familiar with descriptions of wine as “oaky,” and we might even recall references to particular flavors associated with oak, like toasty, nutty, spicy and so on. How is oak actually used in winemaking and how does it affect the taste of your wine? Read on to learn about the varieties of oak most commonly used in winemaking and its effect on the wines you love.

Traditionally, oak barrels were the most common and practical containers for wine. Before glass technology advanced to the stage allowing modern wine bottles, wines were bought and consumed by the barrel. It wasn’t unusual for wealthy wine lovers to keep multiple casks in their cellar for storage. Over time, these wooden barrels added flavor to the wines stored inside – flavor that has been associated with fine wine until modern times. 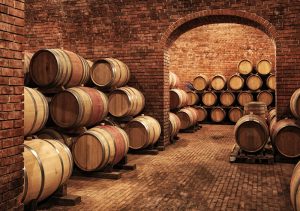 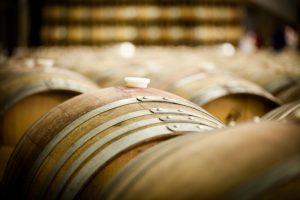 If you make a habit of reading wine descriptions, you’ll see constant references to the age of oak, such as “two-or three-year-old barrels” or “new oak.” A brand new barrel is like a tea bag that has never been used – it has lots of flavor to impart to wine. As a barrel ages, it passes on less and less flavor to the wine and eventually becomes a neutral vessel.

Mediterranean wine-producing countries like Greece made their wine containers from clay in antiquity, but French wineries brought wooden barrels into popular use in the past few centuries. French oak comes from two indigenous European trees called “Quercus Robur” and “Quercus Petraea” – with “Quercus” being the Latin word for “oak.” French oak is the most expensive variety commonly used, as European forests are relatively small and well regulated, keeping demand high throughout the world. French oak produces subtle flavors best described as baking spice, like cinnamon, nutmeg, and cloves along with vanilla and toasted nuts. Many winemakers from the New World use French oak in their winemaking to evoke the great traditional wines of regions like Bordeaux and Burgundy. 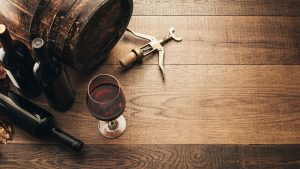 Also known as “Quercus Alba,” or white oak, American oak is the most widely used and least expensive of its kind. White oak can live for three centuries or more, and its flavors are associated with some of the most famous beverages in the world, including wine, scotch, and bourbon. American oak adds a rich flavor of coconut and sweet vanilla that can be almost overpowering in certain wines. It’s closely associated with California Chardonnay and Cabernet along with other New World wines like Barossa Shiraz and Mendoza Malbec. The only part of Europe to embrace American oak traditionally is Rioja in Spain, which benefited from wide land holdings and access to forests in the New World.

Now that you know a little more about American and French oak, you’ll be better equipped to understand technical writing about wine and tasting descriptions. Hopefully, this will translate into even greater understanding and enjoyment.