While the amazing wine deals offered by Wines ‘Til Sold Out keep flowing, sometimes a producer ascends to such heights that we feel their story is worth sharing. Within every bottle, Domaine Roger Sabon provides a palatable conduit to the distinctive Mediterranean terroir of Châteauneuf-du-Pape and other beloved appellations throughout France’s southern Rhône region. Whether you’re already a fan or seeking a new favorite estate to follow, we encourage you to read on and gain more familiarity with Domaine Roger Sabon.

Background of the Domaine

The marriage of Seraphin Sabon and Marie Jausset marked a new era for her family’s wine business as their vineyard holdings increased. By 1921, they converted a portion of the production to estate bottling. Eventually, the couple’s three sons, Joseph, Noël, and Roger, respectively established their own successful domaines in Châteauneuf-du-Pape, the latter in 1952. Roger’s sons Jean-Jacques, Denis, and Gilbert, ushered in the next phase for the company after assuming control in 1976. Jean-Jacques’ stepson, enologist Didier Négron, took over the winemaking duties in 2001, while Denis and his son Julien managed the vineyards. Meanwhile, Julien’s daughter Delphine oversaw commercial facets of the business.

Among the 50 hectares of vineyards on both sides of the Rhône River owned by Domaine Roger Sabon are a varied selection of plots within the Châteauneuf-du-Pape, Lirac, and Côtes du Rhône appellations. Their wines achieve more diverse, complex flavor profiles by utilizing different soils, including the stones locally known as galet roulés, sand/sandstone, clay, and limestone. Under the region’s warm, dry setting, they cultivate Grenache, Syrah, Mourvèdre, Cinsault, Carignan, and smaller portions of other permitted black grapes for red wine production. Grenache Blanc, Roussanne, Viognier, Clairette, and Bourboulenc represent the majority of their white grapes. 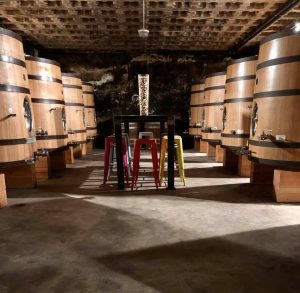 Grapes for the red Côtes du Rhône undergo a 15-20 day maceration, while those for Lirac and Châteauneuf-du-Pape are given a full month. The domaine considers the individual conditions of each vintage to produce wines with optimal structural balance, seeking harmony among tannins, acidity, and weight. Their Châteauneuf-du-Pape reds often age in concrete or stainless steel for the first six months. After transferring them to oak vessels of varying sizes, these wines may refine for another year or longer before creating the final blends.

According to winemaker Didier Négron, “It is always our goal to strive for perfection, to make the utmost out of what nature gives us. We also want to produce one wine annually that reflects the best attributes of its vintage.”

Hand-picked grapes from clay-limestone soils inform Les Olivets, typically a blend dominated by Grenache with small amounts of Syrah and Cinsault. This cuvée provides an excellent introduction to the estate’s elegant and ripe yet understated style of Châteauneuf-du-Pape that’s approachable soon after release.

Grenache unites with Syrah and Mourvèdre in their Réserve blend, bringing darker fruit and savory hints into focus. Here, the wine’s power and virility indicate a potential for positive development in the cellar, especially with bottles from the top vintages, which often garner critical ratings in the mid-90s.

Once again, Grenache plays a prominent role in the Prestige cuvée. The percentage of Syrah usually increases while other varieties such as Mourvèdre, Counoise, and Vaccarèse also make an appearance. The result offers an intense, rounder expression that consistently scores in the mid-90s range while delivering improvement with time in the bottle.

While Domaine Roger Sabon keeps the exact blend of this aptly named wine under wraps, their finest, hand-harvested Grenache grapes take center stage. Described in a recent Jeb Dunnuck 100-point review as “a thrilling, magical wine” and “modern-day legend,” this sublime, ultra-premium offering captures the soul of Châteauneuf-du-Pape unlike any other. It will make a treasured addition to even the most well-stocked collection.

Visit WTSO.com for the best deals on Domaine Roger Sabon’s Châteauneuf-du-Pape cuvées along with other incredible producers – all conveniently shipped to your door!